Wellington Airport has released a new master plan showing how it will accommodate future growth for the region over the next 20 years. The proposed masterplan includes a terminal expansion, runway and taxiway system improvements, new freight facilities, additional aircraft parking stands, and a modern fire station. The plans also accommodate rapid transport from Wellington’s city centre. By 2040 the airport is expected to double its economic contribution to the region from $2.3 to $4.3 billion per year and facilitating more than 22,000 jobs.

Steve Sanderson, Chief Executive of Wellington Airport, says the master plan shows how the airport will cater for a doubling in travellers from 6.4 million today to the 12 million that are expected to pass through every year by 2040. “The forecast growth will mean demand will exceed existing capacity and we need additional land to accommodate the airport’s operations and the new generation of aircraft that are carrying increasing numbers of passengers more efficiently.”

As an international airport, Wellington has an extremely small 110 hectare footprint compared to Auckland Airport’s 1500 hectares and Christchurch’s 750 hectares, says Mr Sanderson. “This has made us one of the most efficient and innovative airports in the world – but it limits our options. Growth to the south and east is the most feasible option given the airport’s geographical constraints.

“This master plan sets out our vision to meet the needs of travellers and airlines, but also provide new possibilities and opportunities for the city, the region and New Zealand.

“Our growth will play a pivotal role in shaping Wellington’s future. Wellington is now a destination in its own right with the city consistently rating as one of the most liveable in the world.

“Now more than ever, growing Wellington’s global connectivity is critical to the city and the country. That’s why we’re setting our sights on creating the airport of the future to support business and freight connectivity, increase employment opportunities, support sustainable tourism for New Zealand, improve personal travel options and ultimately enhance Wellington’s links to the world.”

“This project also represents one of the largest investments in infrastructure in the region and will generate additional construction jobs and other opportunities for Wellingtonians.”

The airport is seeking to acquire the former Miramar South School site land and the southern portion of Miramar Golf Course to provide space for additional aircraft stands, taxiways and aprons. Wellington Airport is working with Miramar Golf Club to purchase half its land. Following consultation with residents and its members Mr Sanderson says the airport will submit an application to Wellington City Council for a Notice of Requirement for a Designation for that land.

“Few airports serve their city as well in terms of proximity to the CBD. As a truly city airport, we acknowledge our responsibility to our neighbouring community and will work closely with them to ensure they are fully engaged.”

Aircraft emissions are currently 2% of all global carbon emissions and domestic aviation contributes to about 1% of New Zealand’s total carbon emissions. While Wellington's passenger numbers are forecast to double in 20 years, likely commercial aircraft movements are forecast to increase by 25%. At the same time the next generation aircraft are 20% to 30% more efficient and the International Air Transport Association has committed to reduce airline emissions by 50% by 2050. Wellington Airport is targeting a 30% reduction in its operational emissions by 2030.

“We will also be watching with interest the progress of the Let’s Get Wellington Moving programme,” says Mr Sanderson.

“While the number of travellers are growing, there is a significant number of people moving between the eastern suburbs to the city centre and beyond. 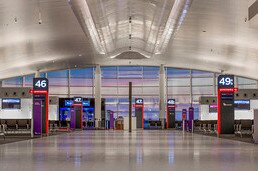 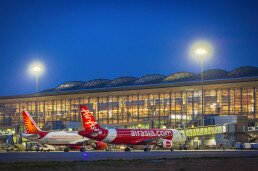