A few weeks ago, ACI Asia-Pacific’ Regional Environment Committee members and other environmental sustainability experts from the region’s airports convened for a webinar to exchange stories and update each other on their airports’ long-term carbon goals and activities.

Airports Council International (ACI) has led at the global level, advocating for decarbonization and climate actions in the airport industry in response to special reports published by Intergovernmental Panel on Climate Change (IPCC) - immediate, rapid, and large-scale reductions in anthropogenic greenhouse gas emissions are necessary to stabilize global warming between 1.5°C-2°C.

On 8 June 2021, ACI World and the five ACI regions – in collaboration with members – have created a Long-Term Carbon Goal (LTCG) for their member airports.  This was followed by ACI World joining forces with other key industry stakeholders and declaring on 5 October 2021 to bring the global air transport industry (airlines, airports, air traffic management, aircraft and engines manufacturers) together for climate goal - Fly Net Zero by 2050.

At a regional level, members at both Asia-Pacific and Middle East airports have already signified their support of ACI's LTCG.  Furthermore, 17 member airports in Asia-Pacific have in 2021, also pledged to achieve net-zero carbon emissions by 2030 or 2050.

With a focus on the LTCG of net zero carbon emissions, the representatives from Delhi and Narita spoke at length on who are their primary stakeholders are, the target and scope of their initiatives, time frame for achieving the targets and how they intend to implement their strategies, as well as their reasons for pursuing such goals.

Recognizing the importance of decarbonization in the airport’s sustainable developments, Rekib shared DIAL had aligned its environment policy with the industry’s expectation, to implement LTCG with the aspiration of becoming a ‘net zero carbon emission airport’ by 2030, well ahead of industry’s 2050.  In the four phases of implementation from setting a baseline, to emission projection, solution assessment and goal identification, DIAL considered factors including India’s climate change objectives (NDC commitments under Paris Agreement, COP 26 commitments, state action plan), ICAO and ACI’s objectives, Airport master planning and infrastructure expansion etc..

Balancing the potential challenges and available resources, DIAL identified a few suitable strategies - green infrastructure, renewable energy, increased sink, etc, with concrete action items and a roadmap. In particular, Rekib spoke of eight actions items DIAL had selected to reduce carbon emissions, with renewable energy as a major strategy to address future growth in emission. One relevant programme shared included a 7.84MW onsite solar photovoltaics project.  Another example was the long-term power purchase agreement signed by DIAL with hydro energy producers to meet the electricity demand of Delhi Airport. The plant is currently under construction and once commissioned (expected within 2022), it will ensure that the entire electricity related emissions of Delhi Airport is to zero.  The GMR Group and Delhi Airport declared their commitment to lead the journey of net-zero emission to shape a more sustainable airport industry.

Webinar participants then got to hear Sho talk about Narita’s initiatives and efforts. NAA has established 'Sustainable NRT 2050' as a new framework to achieve its long-term carbon goal of 2050, and is working to reduce the airport-wide CO2 emissions. With an aim to achieve a decarbonized society with a mid-term 2030 (30% CO2 reduction) and long-term 2050 (net-zero emission) target, NAA has already introduced advanced technologies, renewable energy projects in solar power, LEDs in aeronautical lighting.

Also using 2015 as the baseline year and with a view of reducing Narita Airport’s CO2 emissions per flight by 30% before FY2030, and by 50% airport-wide CO2 emissions before FY2050, Sho elaborated how one crucial initiative for the airport was to reduce carbon emission, transforming itself into renewable energy hubs, with a focus on CO2 emissions from facilities and vehicles. The programmes established would utilize advanced technologies to convert airport building to Net Zero Energy Building as well as operate the airport with 100% renewable energy and LED airfield lighting by 2050.

Despite the aviation industry overall faces a difficult economic environment, Narita Airport puts ‘Climate Change Initiative’ as one pillar of its development with significant investments and time, and calls for global decarbonization effort as an industry leader. 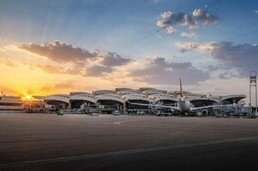 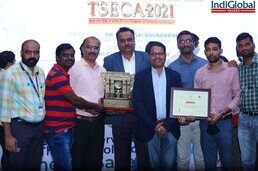