Passenger Traffic at HKIA Continues to Pick Up in October

Airport Authority Hong Kong (AAHK) today announced the air traffic figures of Hong Kong International Airport (HKIA) for October 2022. During the month, passenger throughput at HKIA reached 755,000, representing a surge of 447.9% over the same period last year. Passenger volume in October 2022 returned to around 13% of pre-pandemic levels. Cargo throughput and flight movements declined year on year by 23.9% and 10.2% to 351,000 tonnes and 12,575, respectively.

The growth in passenger throughput was mainly driven by increases in both Hong Kong resident and visitor traffic due to the relaxation of local quarantine measures. Passenger traffic to and from Southeast Asia experienced the most significant increase.

Cargo volume continued to be affected by global economic uncertainties, on-going geopolitical tensions and disruptions to global supply chains. Exports and imports decreased by 26.0% and 29.0% respectively, compared to the same month last year. Cargo traffic to and from North America registered the most significant decrease.

Meanwhile, HKIA was named “Cargo Airport of the Year – Asia Pacific” at the 9th Payload Asia Awards organised by Payload Asia. The awards are determined by online votes and an expert jury panel and recognise outstanding organisations in air cargo and logistics sectors.

Cissy Chan, Executive Director, Commercial of AAHK, said, “We are honoured to receive this award, which demonstrates the HKIA cargo community’s professionalism and commitment to service excellence. We will spare no efforts in working with the air cargo community to offer the best service with a view to maintaining HKIA’s position as the airport of choice for cargo delivery. ” 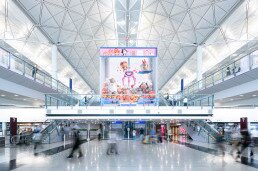 Passenger Volume at HKIA Continues to Pick Up in November 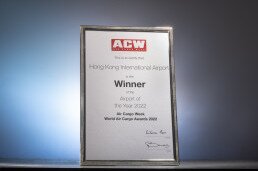 Passenger Traffic Continues to Grow in June at HKIA